The city of Bagnot was founded by Arim the Pauper in 1330 in the ruins of a much older settlement. Bagnot was the main settlement of his people. Initially it was a sacred community and quite different from the settlers' former tribal life. It was ruled by Arim the Pauper, an Orlanth priest who became a sacral king, and later became the seat of power for his dynasty. Many refugees from Holay fled here after 1347, and Bagnot became a hotbed of anti-Lunar activity.

In 1395, it became the capital of Yarandros' powerful Kingdom of Tarsh, which ruled not only his core territories around Bagnot and Kordros Island, but also the Aldachuri, the Quivini, and even (at times) the Grazers. Tarshite troops ranged from Holay to Prax, and even sacked the Lunar city of Cafol. Bagnot was greatly enriched during this period, and Yarandros had lowland masons build temples and a fine palace, and the great walls around the city date from this time.

In 1448, Yarandros' son King Orios was killed in Imther and his death plunged Tarsh into a ten-year civil war which left the kingdom divided and vulnerable. In 1455, Bagnot was sacked by Quivini and Praxians. It remained the capital for the Illaro dynasty, although Furthest became increasingly important.

In 1490, many tribes and cities rebelled against Hon-eel, who had proclaimed herself regent for her unborn son. The rebels were defeated by the Lunar magicians at the Battle of Dancing Sisters, and the Lunar army pursued the survivors to the gates of Bagnot where they were repelled. Despite the defeat, Bagnot, protected by a line of forts from Dunstop to Goldedge to Slavewall, refused to submit, and the kingdom of Tarsh was fractured. The non-Lunar tribes, called the Tarsh Exiles, slowly declined as the new Lunar dynasty at Furthest grew more and more powerful.

For almost a century, Bagnot remained the capital of the Tarsh Exiles. However, after the defeat of the King of Dragon Pass in 1582 at the Battle of Grizzly Peak, Bagnot fell to the Lunar Army and much of its population was put to the sword. King Moirades appointed loyalists (especially from the powerful Lunar Orindori Clan) to govern the city and lead the militia. Now under Lunar rule for two generations, Bagnot still has strong cultural and religious ties to the anti-Lunar Shaker’s Temple only 25 km away, and with Wintertop Fort.

Bagnot is Arim’s Vale, a well-watered valley some 30 kilometers long by 7 kilometers wide, surrounded by high hills. To the south is Shake Land and to the east is the West Bush Range. At 950 meters, Bagnot has a humid continental climate, with cold winters and warm summers. Farmers grow barley, emmer wheat, and maize, and raise apples, peaches, pears, and cherries. Farmers mainly worship Barntar and Ernalda.

Sheep are the main livestock, although cattle are a sign of status and wealth. Dinosaurs are common, and herds of ceratopsids, sauropods, and other dinosaur types are often found in the area.

The area enclosed by the old walls of Bagnot covers about 70 hectares. The walls of Bagnot are made of stone and rubble, and are over 5 meters high. The city has four 10-meter-tall gates, one in each of the cardinal directions.

The city temples are built on a rock hill atop the foundations of the older settlement. After the Lunar Conquest, the temple of Orlanth Rex was closed, and its gold and bronze doors were taken by King Moirades as a gift to the Feathered Horse Queen. The temples to Ernalda and the other Lightbringers remain open. The Knowledge Temple is still impressive, although much its collection was taken to Furthest by King Moirades. A major temple to the Seven Mothers and Hon-eel was built by King Moirades in the lower city, built by architects from the Lunar Heartlands. King Moirades also built an amphitheater where sacrifices to Hon-eel might be watched and cheered.

The royal palace dates to the reign of King Yarandros, and is now the residence of the district governor. Its great hall has three areas (a columned entryway, an antechamber, and a main room with a hearth and altars) surrounded by a two-floor complex with apartments, workshops, and storage areas. The Ivory Throne of Yarandros was lost in 1455, but Illaro commissioned a fine new ivory throne during his reign, which now resides in the royal palace in Furthest.

Bagnot has a population of about 3000 permanent residents.

Notes:
At its peak, Bagnot had about 10,000 people.
But that peak was hit probably around 1448 right before the Civil War.
It probably dropped to around 7k during the Illaro dynasty, and then down to 5 k when it was the capital of the Tarsh Exiles.
It probably dropped down to 1k or less in 1582, but has grown back to 3k.
So there is a lot of empty space now. 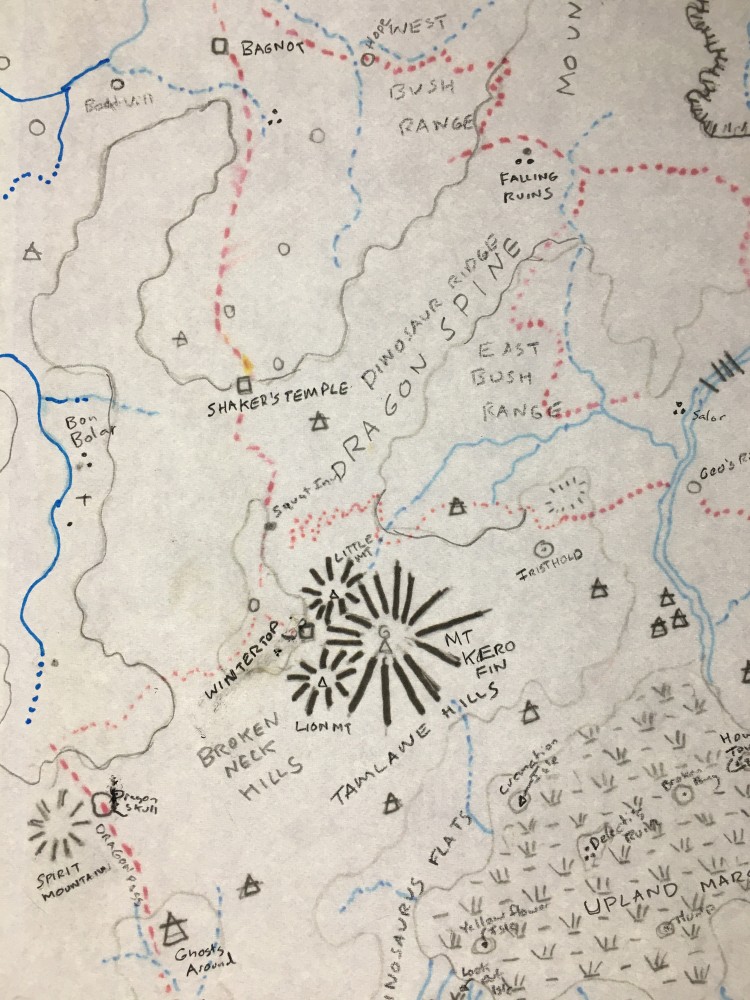