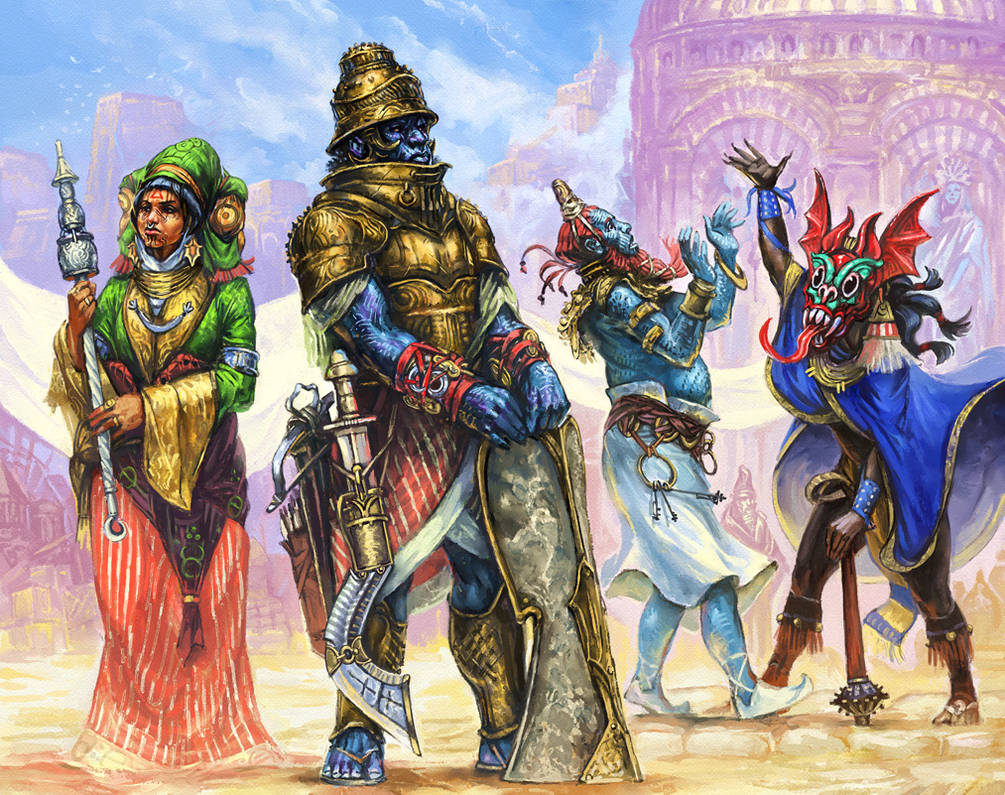 In sunny bazaar, a female masarin and her bodyguard watch imperiously as her blue-skinned slave negotiates with a savage Pujaleg Bat sorceress over some trade rights (perhaps purchasing slaves from the Pujaleg, perhaps hiring them as mercenaries, perhaps just acquiring the rights to buy gold or ivory or some such valuable trade goods). 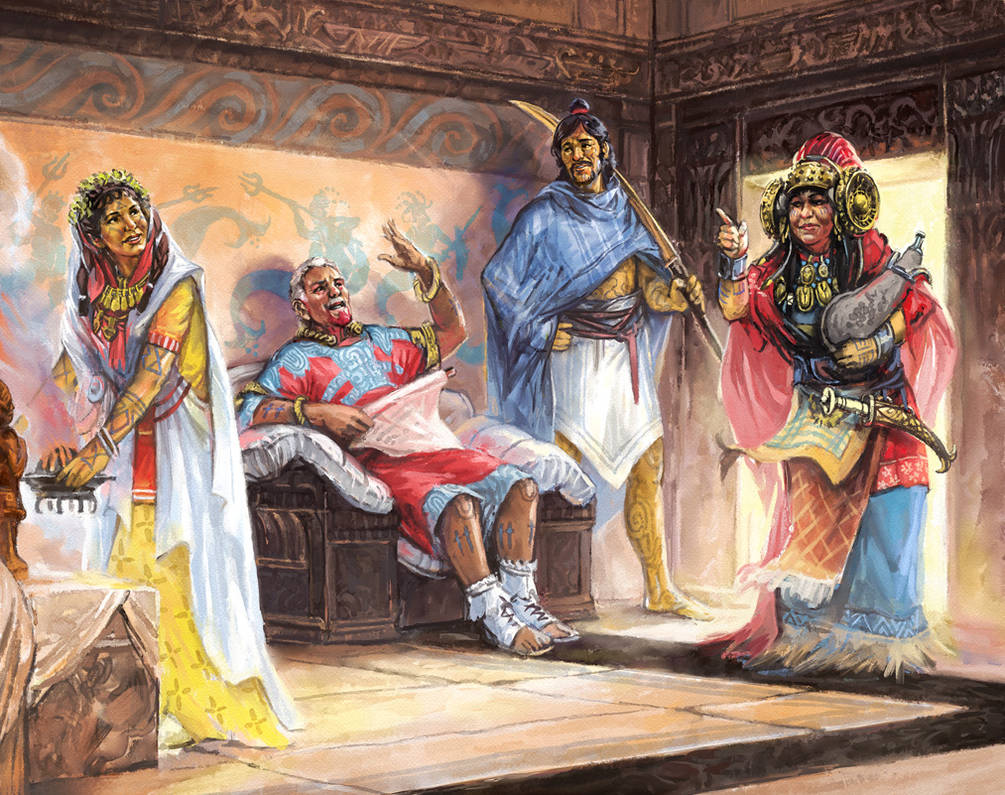 We see the household of a wealthy merchant-captain of the city-state of Nikosdros - his wife (a chieftain's daughter from the Kormarkan tribe), his son (a mercenary leader), and his daughter (who has spent more time with her mother's kinfolk in the hills than in civilized Nikosdros). 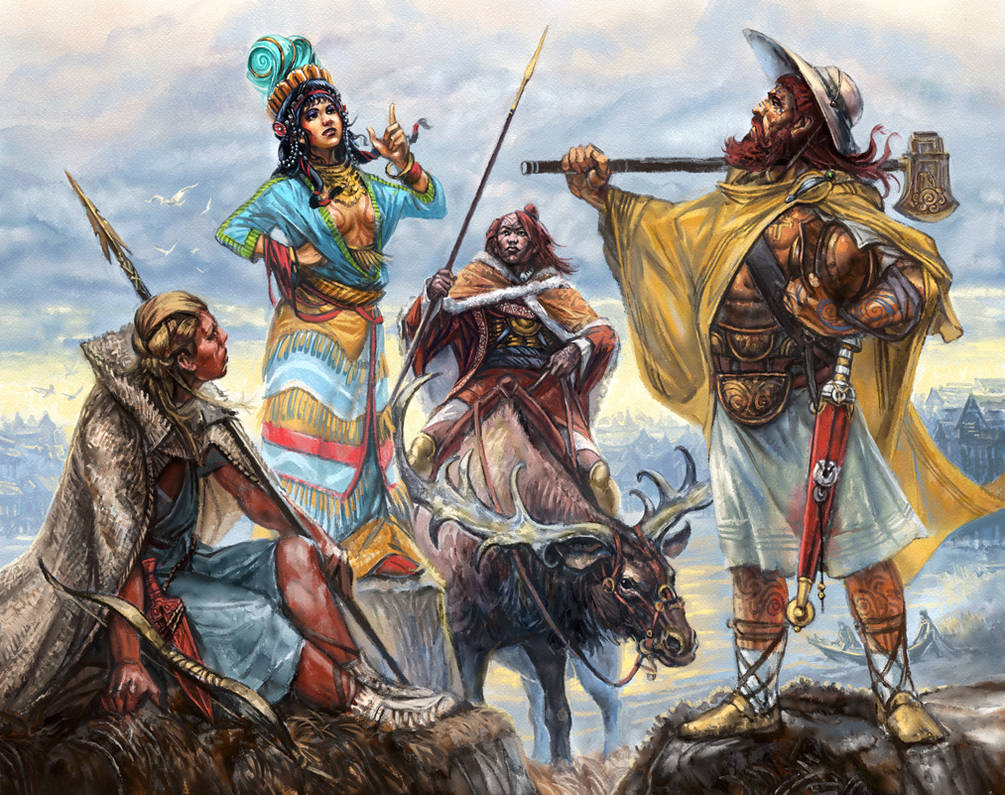 On the shore of a swampy lagoon, three men meet with a high-ranking woman. Her flat-bottomed boat is banked nearby, perhaps her rowers wait impatiently. In the distance can be seen the island city of Handra - city of the Seven Islands. The woman is the high priestess of the goddess of the city, and the three men - an elk-riding Pralori mercenary, a storm-worshiping Solanthi mercenary, and a Auluring river man are on some sort of clandestine mission for her. 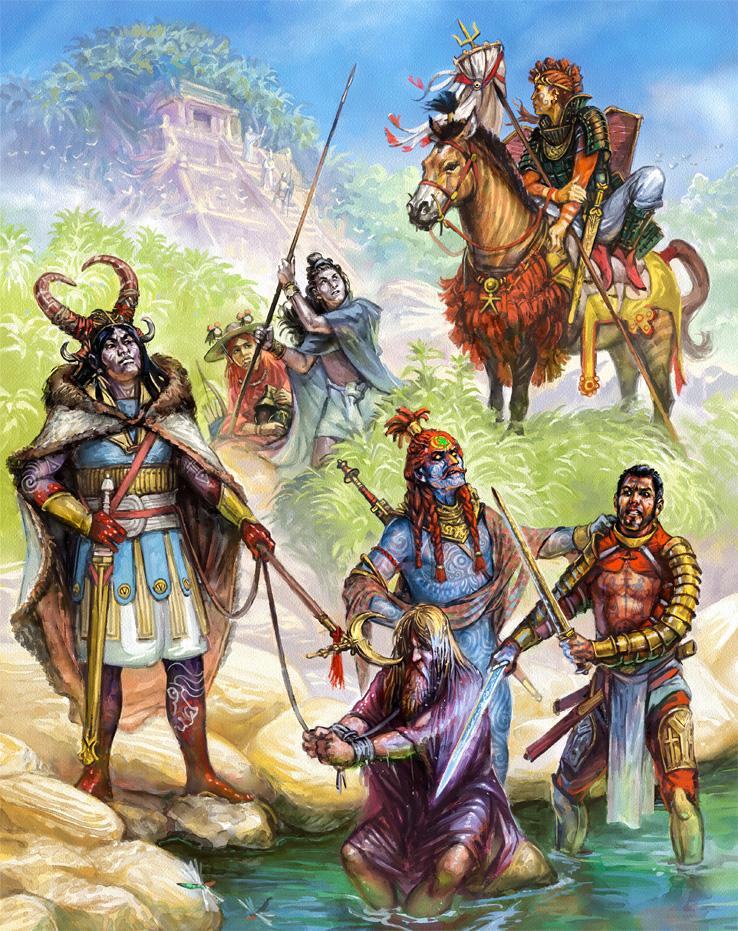 Warriors of the city of Pavis, guard of king Argrath, (consisting of a bull berserker, two levies, a zebra rider on a horse with magical zebra stripes, a wind warlock and a Humakti swordbrother) mock a captive high ranking Lunar at the oasis of Pimper's Block. 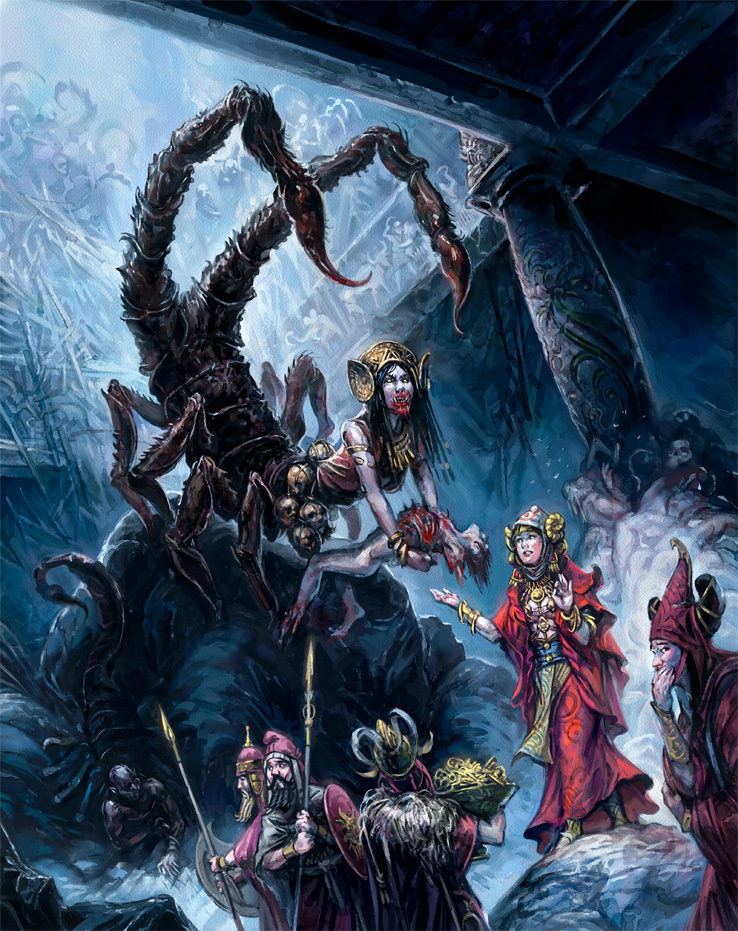 A group of Lunar magicians and guards led by a fearless priestess present tribute to the terrible Scorpion queen, in her (undoubtedly smelly) lair. 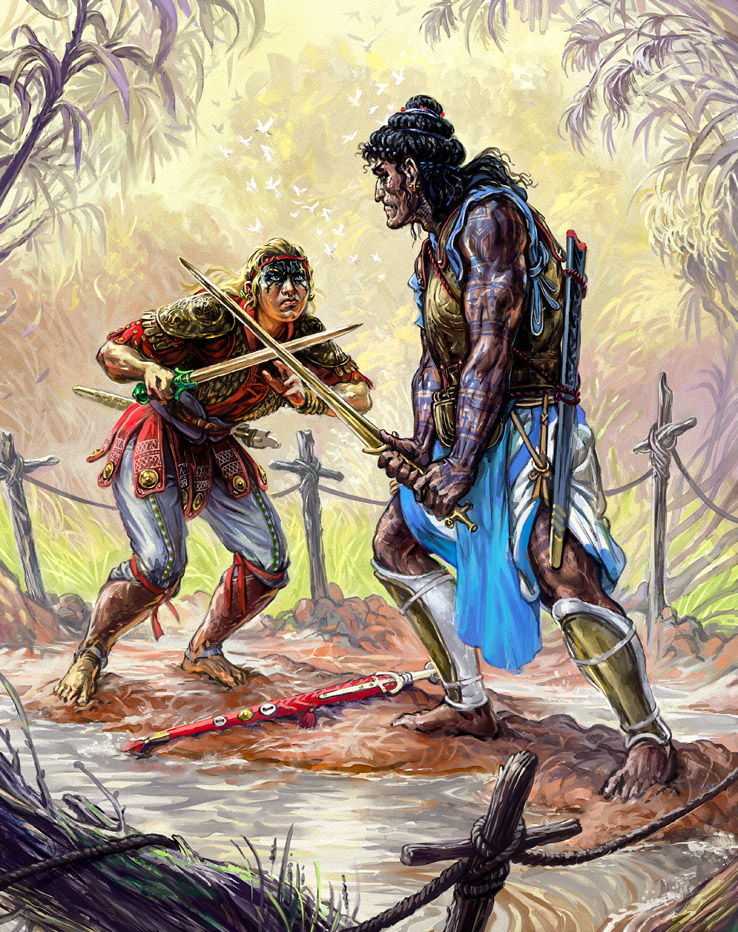 Two worshippers of Humakt (the god os swords and death) prepare to fight each other in a duel to first blood. 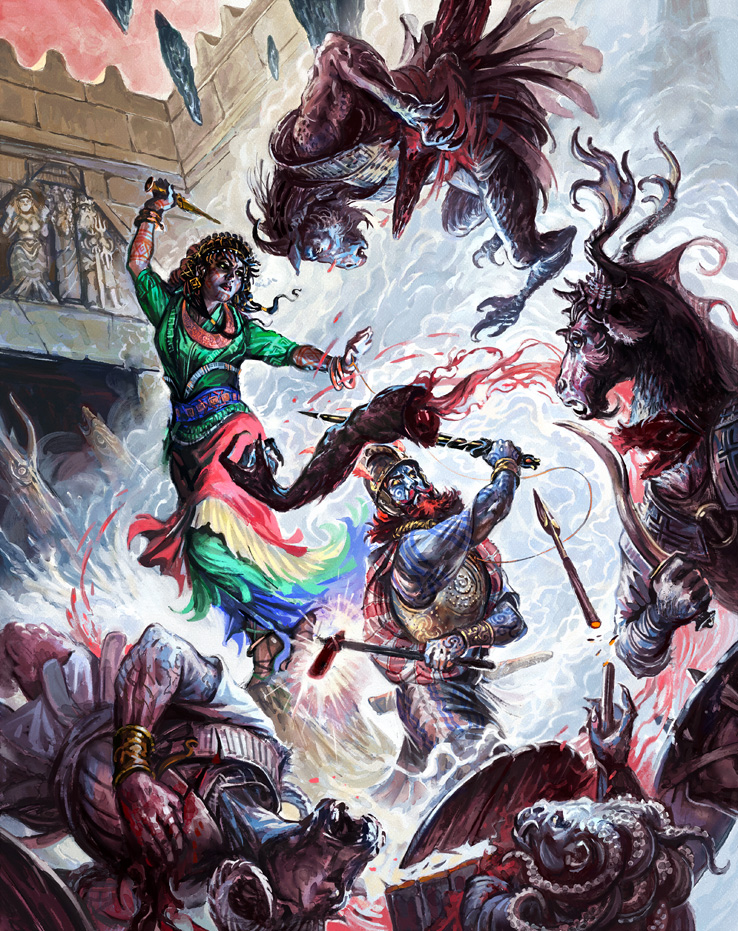 An Orlanthi wind lord and an Ernalda priestess fight off a horde of chaotic Broos. 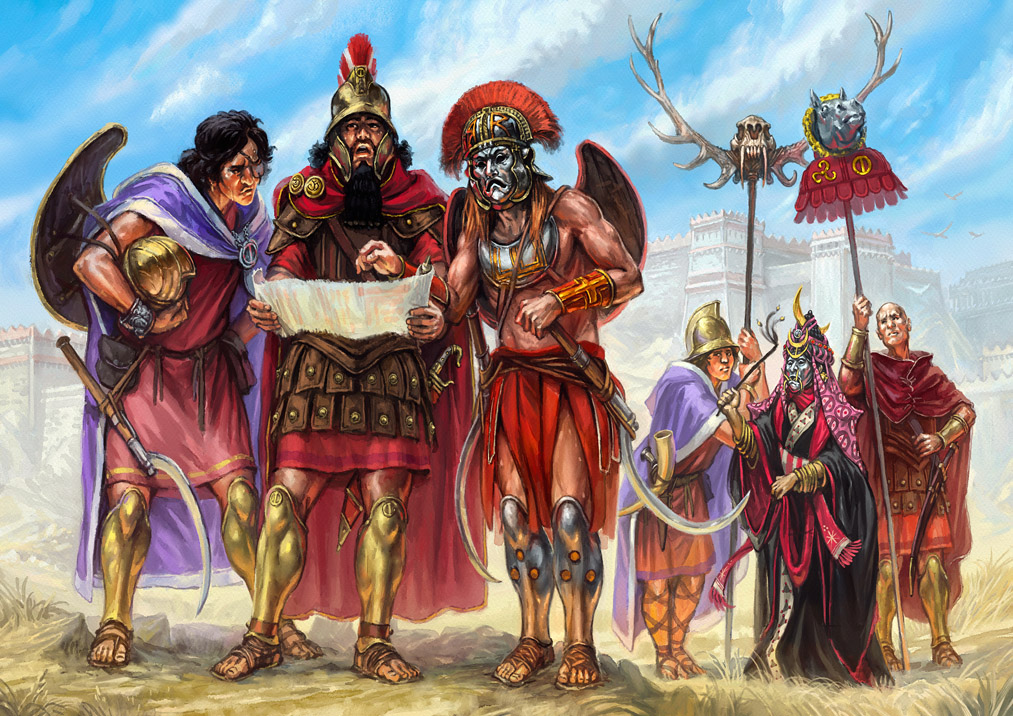 Siege of Whitewall: a bunch of Lunar officers, standard bearers and a priestess.

Officers of the Doblian Dogeaters and Standfast regiments and the Full Moon Corps confer below the pale limestone walls of the sacred Orlanthi temple-fortress of Whitewall.

The officer of the Doblian Dogeaters wears no armor save for bronze greaves and the helmet he holds in one hand. The helmet lacks a horsehair crest; the central rib serves to add strength to the helmet. Instead of his regiment’s rhomphaia he has a sickle-sword tethered by a strap to his belt. His shield is a typical peltast’s crescent shield.

The bearded Standfast officer wears bronze greaves (each decorated with a Moon Rune) and a crested helmet with cheek guards. Instead of his regular bronze torso armor he is wearing a leather cuirass with shoulder pieces, but with the usual leather pteruges with round bronze bosses. A sheathed kopis sword is secured at his hip. The clasp of his red cloak bears his family sigil.

The face of the officer of the Full Moon Corps is hidden behind his grim silver facemask. The members of this regiment wear armor according to their personal preferences; this officer wears an ornate gilded and crosswise crested helmet decorated with golden Magic Runes with a flared neck guard, a silvered pectoral bearing a gold Mastery Rune, gilded vambraces marked with a Death Rune, and bronze greaves displaying Illusion Runes. He carries a curved moonsword on each hip, and a crescent shield strapped to his back. The Runes denote that this demigod immortal as magically potent.

Two regimental standard-bearers and a Major Class magician of the Field School of Magic stand behind the officers.

The standard-bearer of the Doblian Dogeaters wears the same style of helmet as his officer, with a horn at his belt (useful in communicating commands when the regiment is dispersed in open order) and a short sickle-sword. The standard consists of a pole carrying an antlered sakkar skull.

The Standfast standard-bearer is similarly equipped to his officer, but has neglected to wear his helmet during this lull in the siege. His cloak is of a style common in Karasal. The standard consists of a silver horse’s head surrounded by a wreath of golden chains mounted above a medallion bearing the Runes of Moon and Mobility.

The Illuminated magician is casting a spell or blessing. Her garb is rich and eccentric, including a tusked silver mask, long robes bearing Moon Runes and more obscure symbols. The black cloak may denote her membership of the cult of Jakaleel the Witch. Her hair is coiled up and embellished by ornamental falcate moons.

In the background, Whitewall stands proud and defiant, as yet still unassailed. 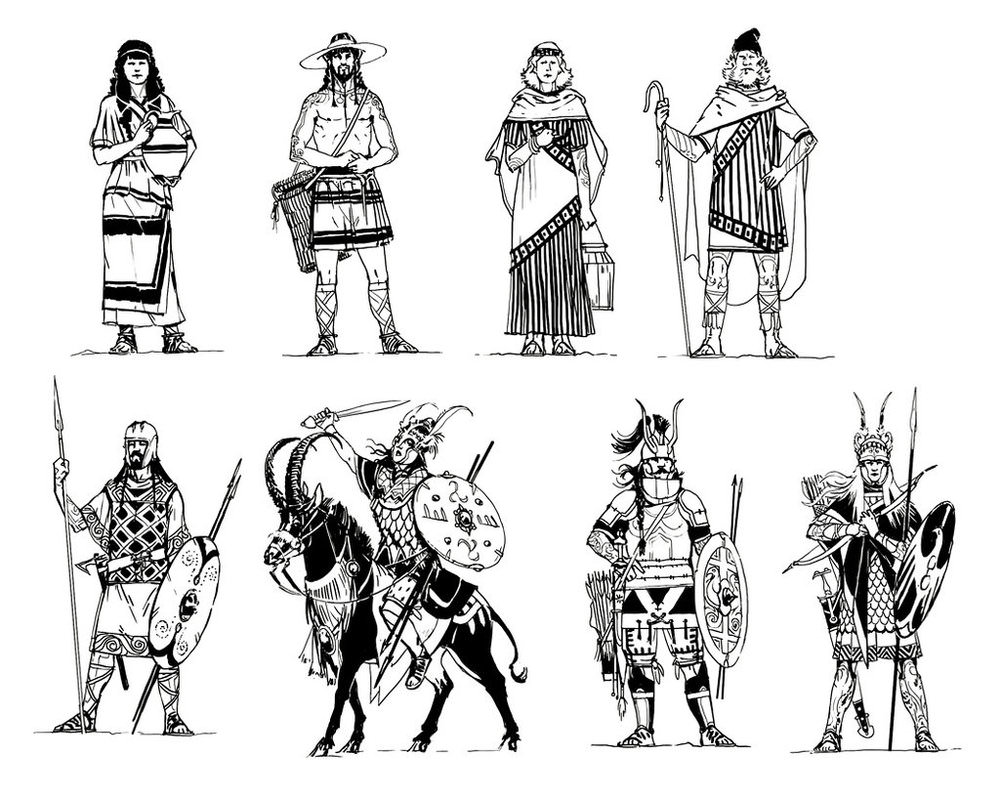 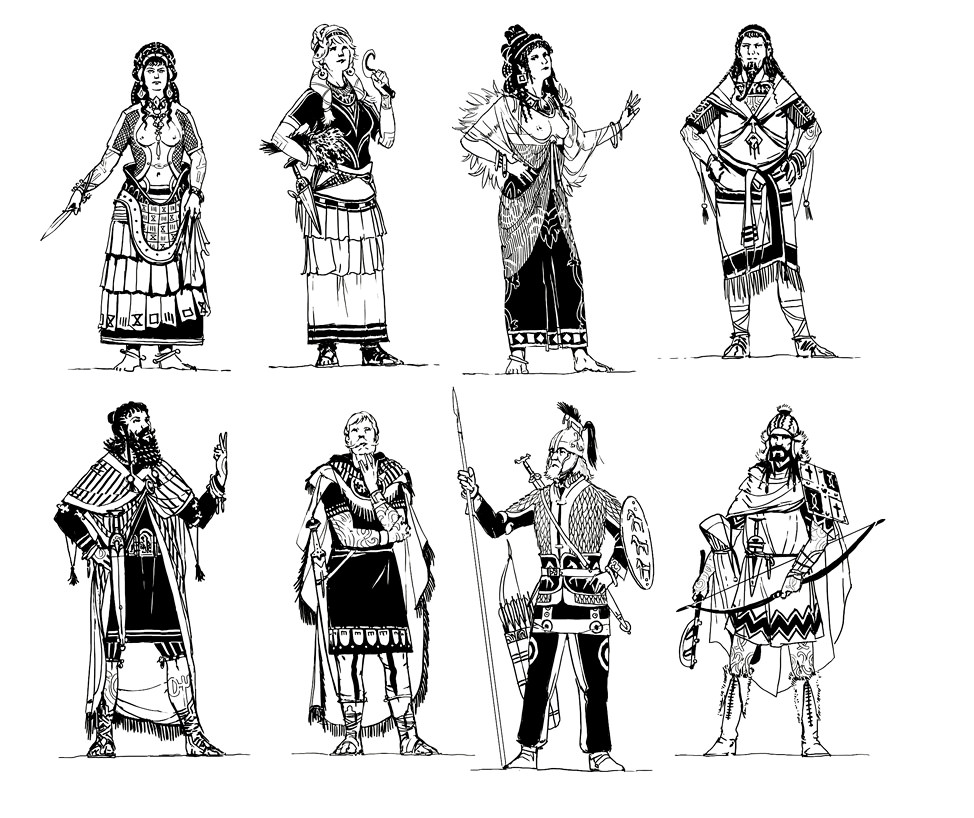 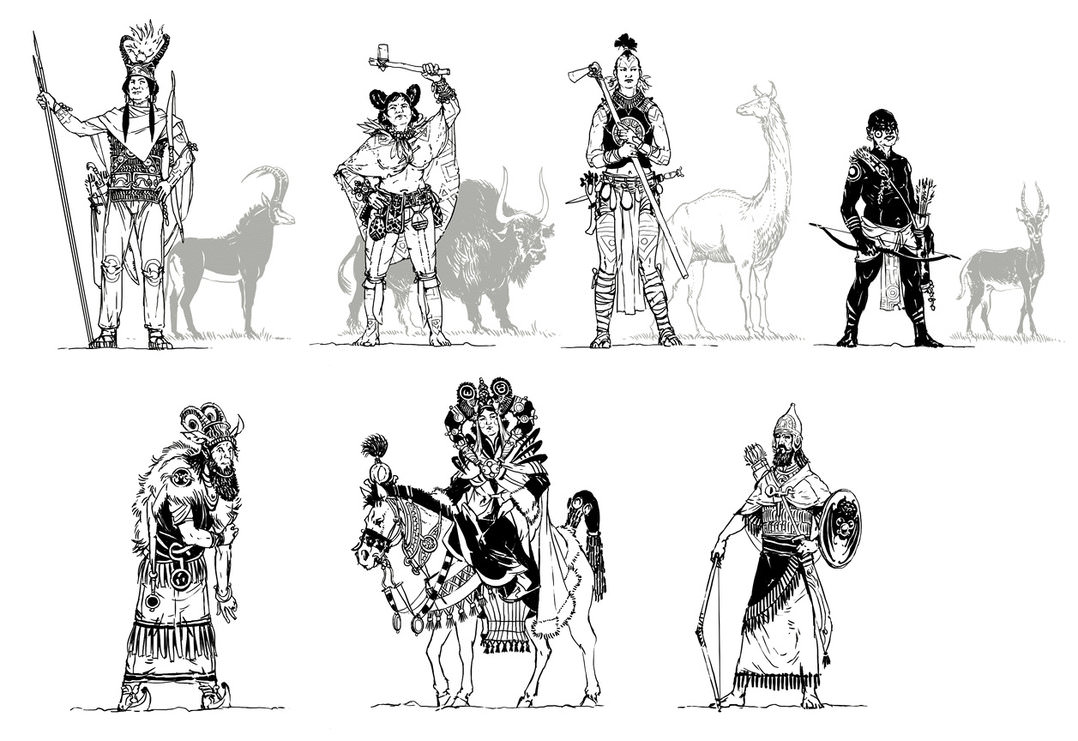 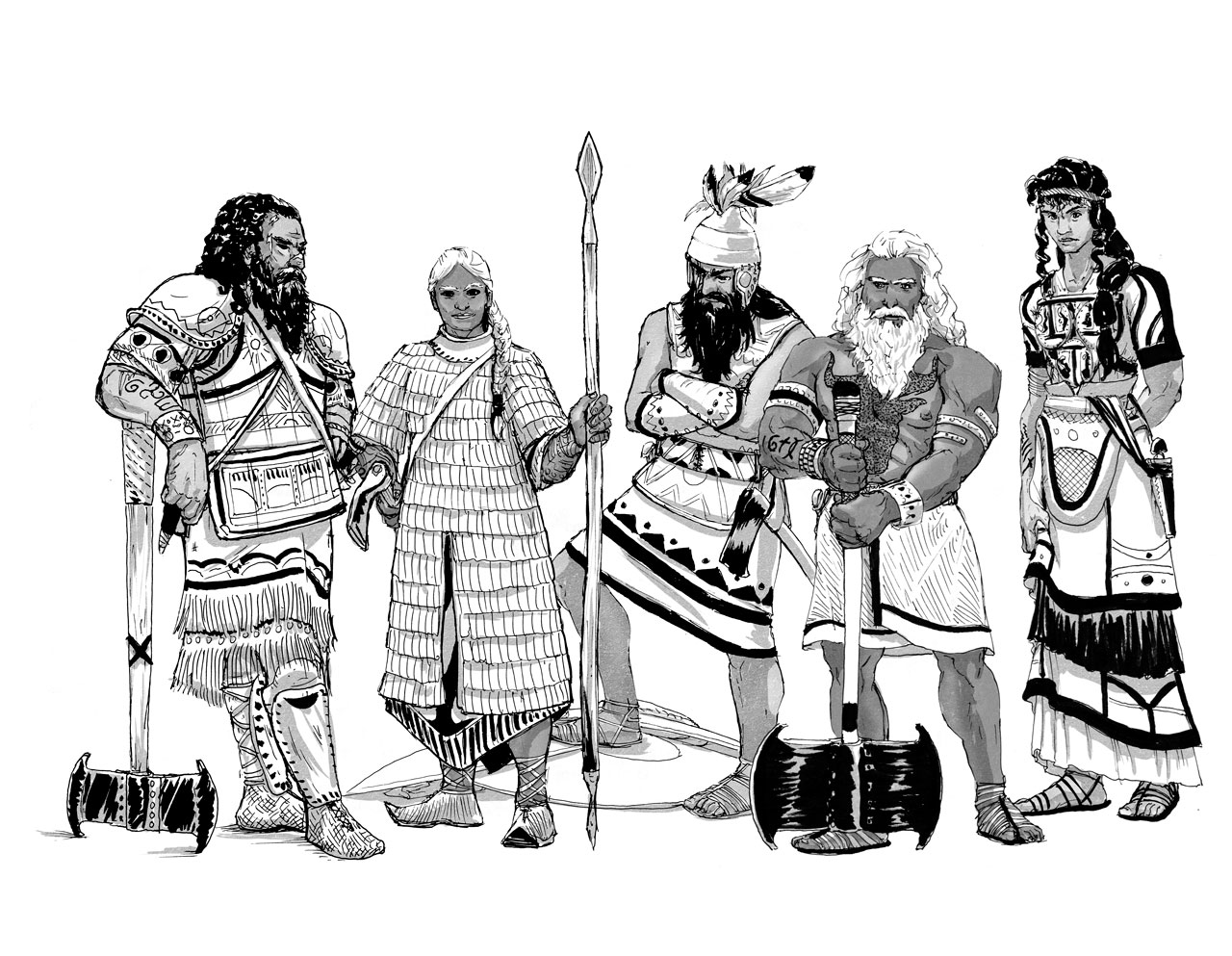 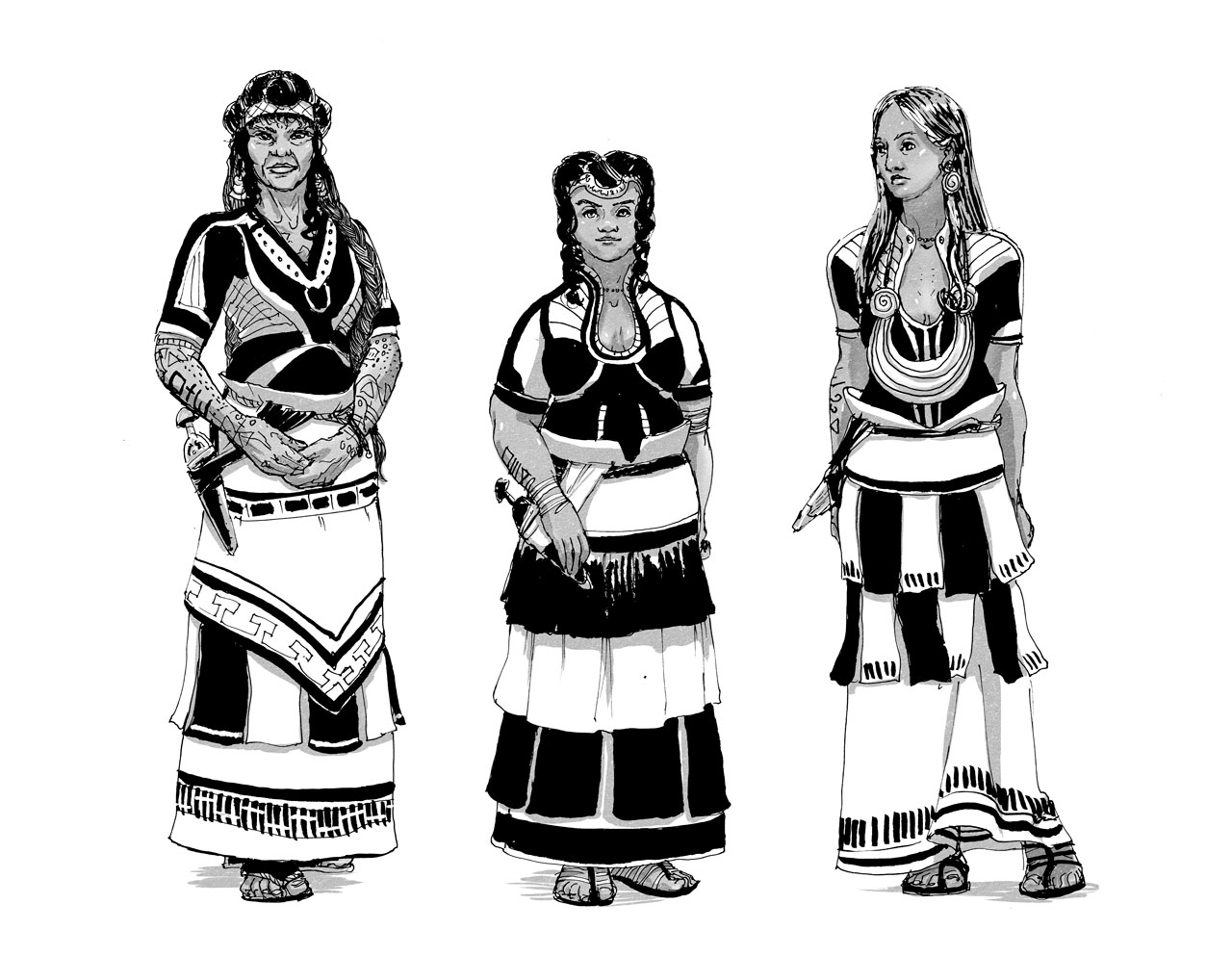 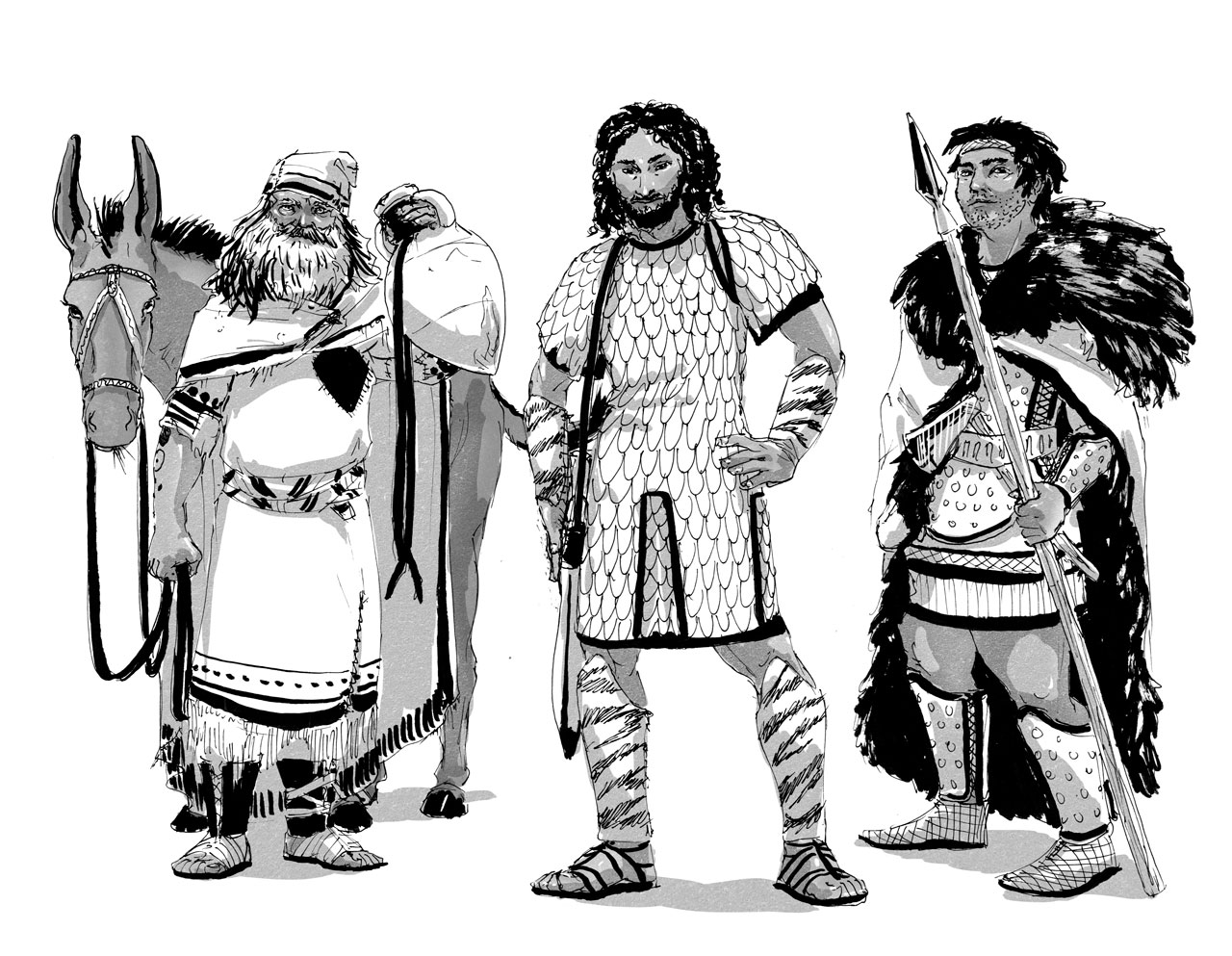 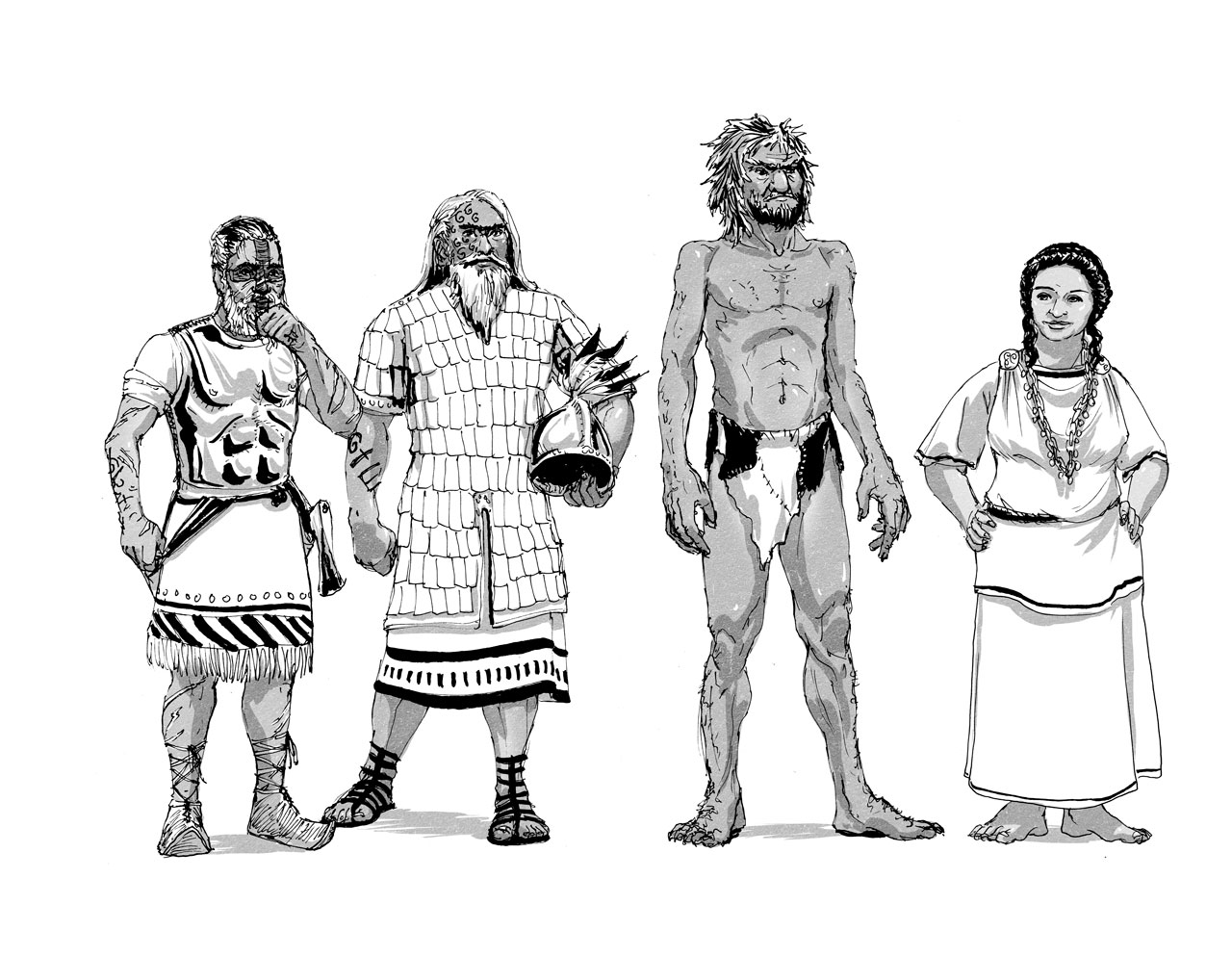 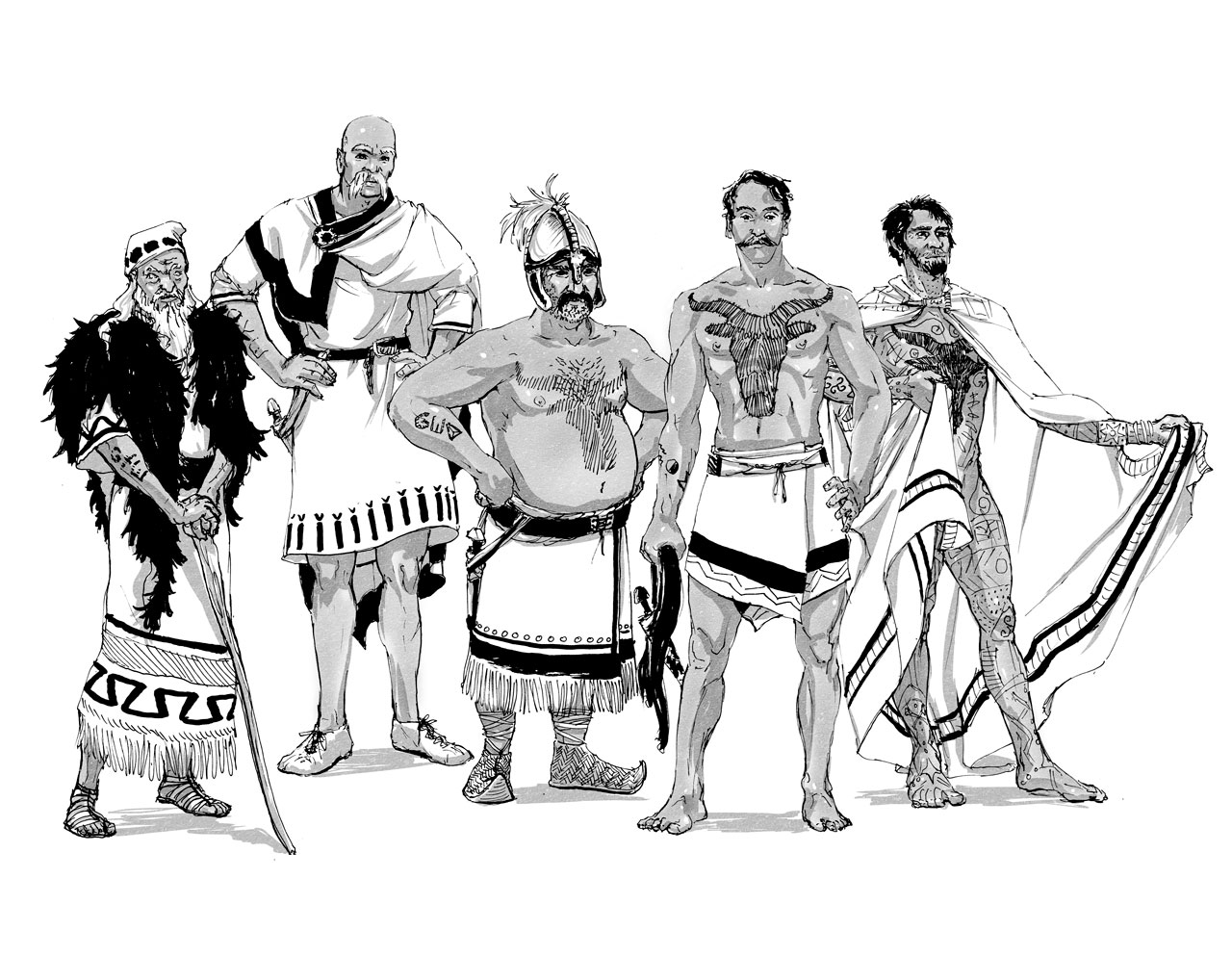