Set in 1619 ST, Six Seasons in Sartar chronicles the last year of the Haraborn, the 13th clan of the Colymar tribe, before their brutal extinction. It follows a group of young Heortlings just come of age, as they arrive at the crossroads between their idyllic childhoods in an isolated mountain valley and the coming storm of the Hero Wars. The book is still in layout, and getting new pieces of art, but so far it looks to weigh in at around 150 pages and will be available by the end of April. It is, of course, a campaign book, meant to help you launch your own Gloranthan sagas, but there are a lot of rule suggestions and ideas you could easily port into your own campaigns.
La preview:
https://andrewloganmontgomery.blogspot. ... eview.html

Just click 'Roll' - it generates random numbers for each die... works out if the % is a critical/Special/Fumble for a range... and hit location for animals and humaniods.... plus a cheap and cheerful SR tracker... 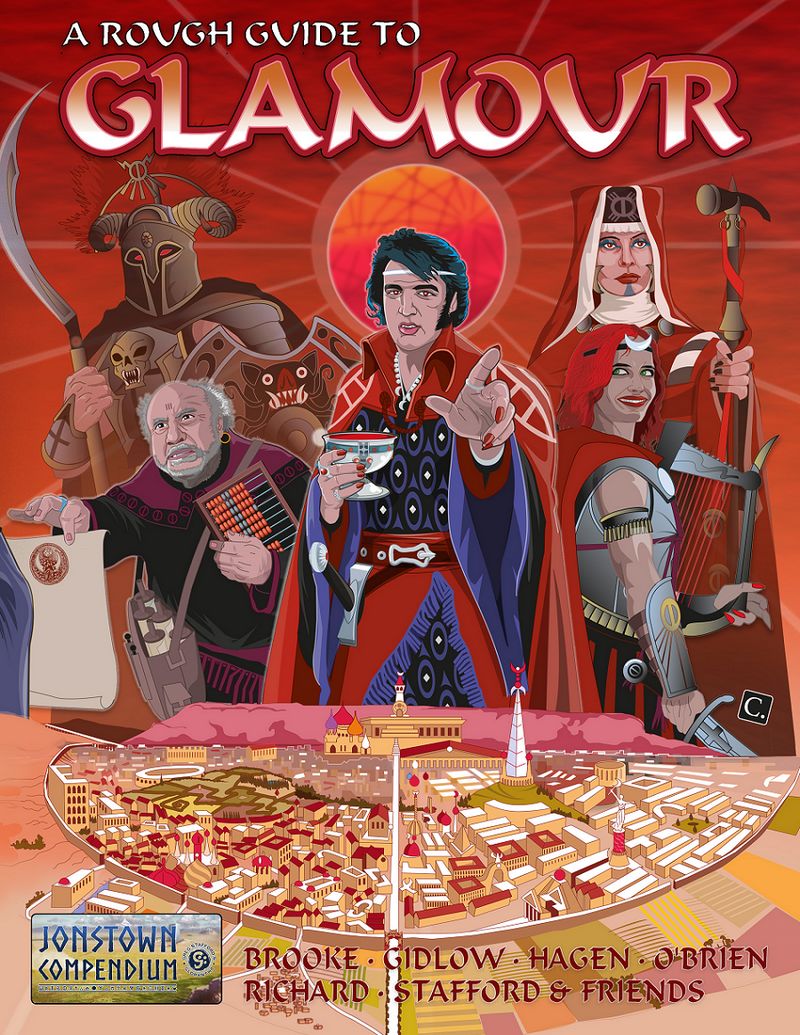 A Rough Guide to Glamour is your indispensible companion for any visit to the capital city of the greatest empire the world of Glorantha has ever known!

. A comprehensive map, gazetteer and guidebook detailing the capital of the Lunar Empire;
. Portraits and descriptions of eleven Very Important People who can be encountered there, including Moonson, the Red Emperor, and the Lunar hero Jar-eel the Razoress;
. A description and map of the Sultanate of the Silver Shadow, the throbbing heart of the empire;
. Sweeping overviews of the geography and history of the Lunar Empire;
. RuneQuest writeups for the cults of the Red Emperor, the immortal wizard-ruler of the Lunar Empire, and the goddess Glamour, the humble nymph who became the First Inspiration of Moonson;
. Insights into the secrets of Kalikos Icebreaker, the Lunar College of Magic and the Imperial Monopolies of the Etyries cult;
. Never-republished supporting material from the legendary fanzine Tales of the Reaching Moon;
. Rumours, fiction, poetry, and more besides!

A Rough Guide to Glamour was first published as a players’ background book supporting Reaching Moon Megacorp’s Life of Moonson, a 50-player live-action role-playing game that debuted in 1997 and ran in the United States, Europe and Australia.

The 1998 edition of the Rough Guide to Glamour contained 29,000 words. We have cut out a third of the book: sections either reprinted in or made redundant by the Glorantha Sourcebook (The Lunar Pantheon, Dart Competitions & New Year Ceremony) and sections primarily written to support the freeform Reaching Moon Megacorp’s Life of Moonson (Recent History & a list of Sultanates, Provinces etc. and their rulers). So there are 20,000 words from the old Guide remaining.

The Jonstown Compendium edition of the Guide contains more than 50,000 words.

Most major sections are significantly expanded (eg: the Gazetteer is 60% longer, detailing 117 locations in Outer Glamour; the Rough Guide itself has two new pages on Holidays and Festivals). We have incorporated material from the Guide to Glorantha (a full writeup of the Silver Shadow Sultanate, with new maps by Colin Driver), from Tales of the Reaching Moon (Cult of the Red Emperor, Lunar Government, Satraps & Sultans, Letter from a Monopolist, A Visit to Glamour), and from the epic Yolanelathon (three interlinked stories by MOB and Nick, presented at various conventions in the nineties but never collected under one cover). There is a new 4,000 word writeup of the Cult of Glamour by Jeff Richard, plus obscure rumours, fragments and oddities scattered throughout (eg: Antiquities of Old Glamour, Red Empire, Pelorian Rhapsody, Annual Dinner of the Lunar College of Magic).

If you liked the original Rough Guide to Glamour, we think you’ll like this version even more!

GLORANTHA IS MANY THINGS.
It's a Bronze Age game setting with a strong anthropological bent. It's a mythological world steeped in Joseph Campbell, Georges Dumézil, and Mircea Eliade. It's a neo-traditionalist artifact designed to recall ancient epics like the Iliad, the Mahabharata, or the Enuma Elish.

And it is a world with Ducks.

Not ducks with a lower case "d," Ducks like Howard, Donald, and Daffy; bitter, emo Ducks that brood like Bogart in Casablanca. It's a world where you can be hired by fish, eat at Geo's, and a race of humans are kept as cattle because they lost an ancient bet. The world is flat, it's made of Runes, and heroes come back from the dead so often it would make Jean Grey blush. Essentially, Glorantha is very much a product of the time and the place where it originated, northern California in the late 60s and early 70s. It is a martini mixing equal parts deep and at times pretentious academic speculation with trippy, counterculture nonsense. Shaken. Not stirred. Served with a twist.

A Rough Guide to Glamour is the perfect microcosm of all this. It's epic, mythic, quasi-historic, and profoundly ridiculous. The Emperor looks like Elvis, the official dialect sounds suspiciously like Orwellian Newspeak, and the goddess of the capital (the titular Glamour) might be Debbie Harry (serenaded by lyrics from the Eurythmics). And I haven't even mentioned Pelorian Rhapsody yet. If I had to "elevator pitch" the thing to you I would describe it as the Punica meets the Illuminatus! trilogy.

In short, it is brilliant. 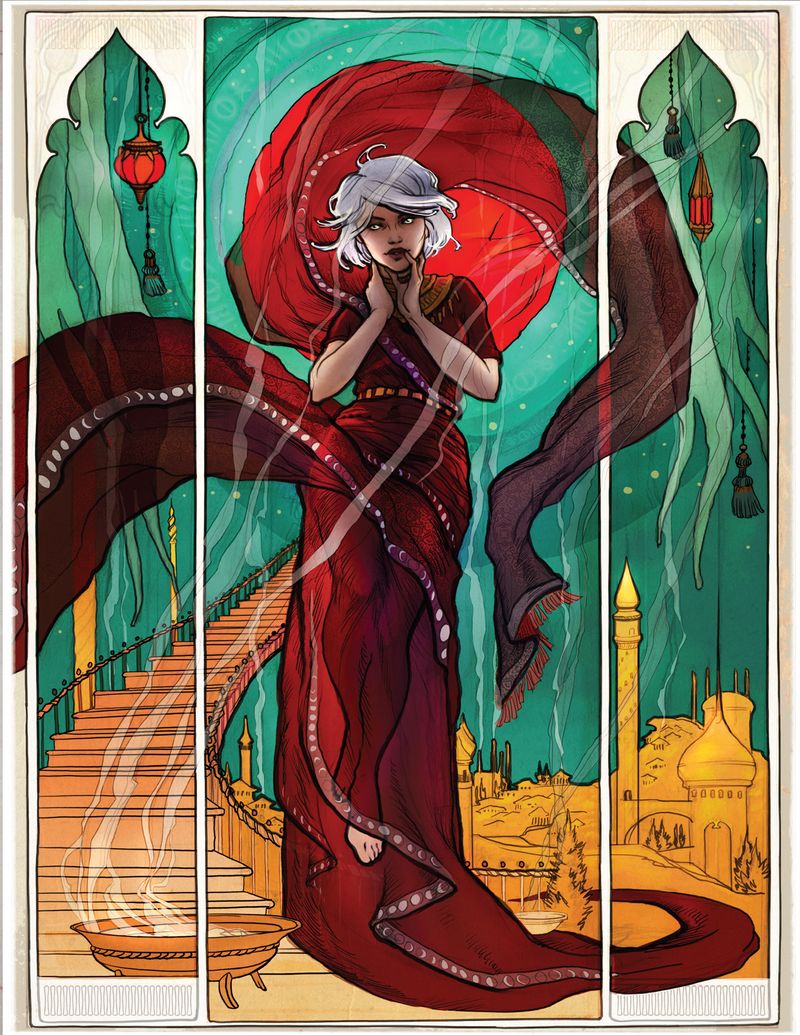